For those who have never been to Wood Buffalo, it is difficult to imagine all the splendor of this place. Wood Buffalo National Park, which is how the name of the reserve (Wood Buffalo National Park) is translated, is located in northwestern Canada and covers a flat expanse of 44,807 square meters. km. This is the largest national park in the Americas, with a total length of 161 km from east to west and 283 km from north to south. Administratively, it is located in the Canadian provinces of the Northwest Territories and Alberta, geographically located between Great Slave Lake and Lake Athabasca. 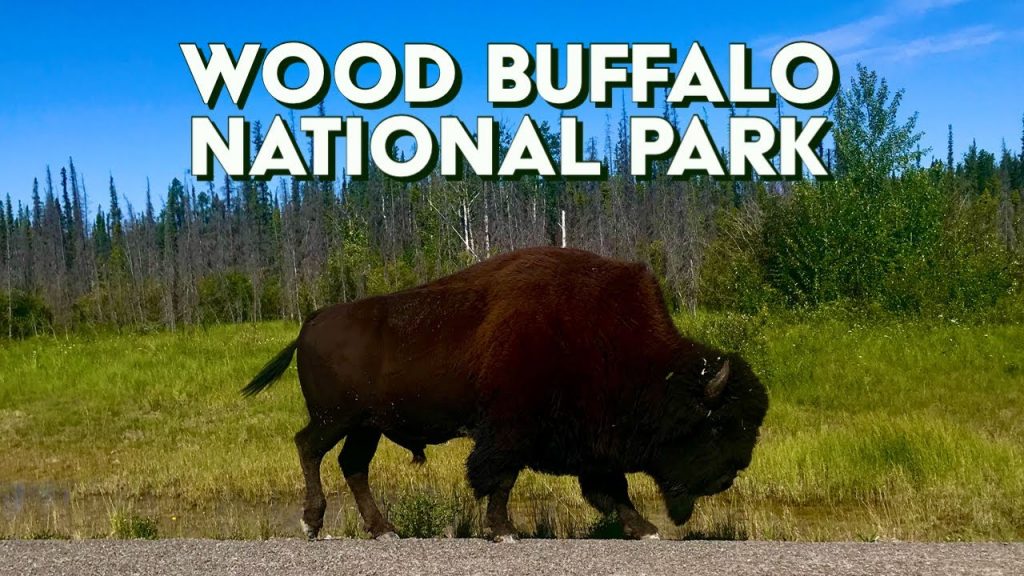 A significant part of the national park is occupied by water bodies – rivers, lakes, swamps. Visiting Wood Buffalo, you can see one of the largest and most beautiful inland deltas created by nature. It is formed by the Peace River and Athabasca, whose waters flow into Lake Athabasca. The park is dominated by plains, although closer to the western side, adjacent to the Caribou Mountains, the relief begins to change. Due to the proximity to the Pole, protected lands have another attraction for tourists. In autumn and winter, visitors to the park have a unique opportunity to observe wonderful play of light in the sky – the northern lights.

The flora of Wood Buffalo is rich and varied.

There are mixed and coniferous forests, shrubs, woodlands characteristic of the tundra, meadow grasses and flowers, as well as typical grassy vegetation of wild prairies. All this, combined with local climatic features – long cold winters, which are replaced by warm short summers – creates favorable conditions for the habitat of numerous animals and birds.

Moose, several species of deer (white-tailed and black-tailed deer, caribou reindeer), hares, marmots, musky rats, porcupines, skunks, and beavers are permanent residents of the national park. An interesting fact: on these lands, researchers have recorded a beaver dam 850 meters long, which is considered a world record (usually the length of such structures does not exceed 100 meters). In addition to the mentioned representatives of the fauna, American black bears and elks, wolves and lynxes, as well as over 200 species of birds live in the park. Among the birds, pelicans and white cranes attract special attention, but the nesting sites of the latter are protected by environmentalists and are closed to tourists.

At the same time, as the name of the reserve implies, the main inhabitants of Wood Buffalo are American bison, for the sake of saving the population of which the park was created. These massive animals are somewhat reminiscent of the European bison, weigh about a ton (900 kg), their body reaches 2 m in height and 3 m in length. Biologists distinguish between the forest and steppe subspecies of bison, both are represented in Wood Buffalo and, largely due to the protection of this protected area, still live on our planet. At the time of the creation of the national park (1922), the number of forest shaggy bison did not exceed one and a half thousand, now the herd reaches 2,500 heads and is recognized as the largest on the continent. The number of steppe bison is noticeably higher and in the 1960s it crossed the line of 10,000.

The unique nature of Wood Buffalo was the reason for its inclusion in the list of UNESCO World Heritage Sites, which happened in 1983 and provoked the pilgrimage of tourists to these parts. Meanwhile, getting to the national park is not so easy. First you need to make an air flight to the city of Edmonton (Canada), after which you can get by car or charter flight (your choice) either to the city of Fort Smith (Province of the Northwest Territories) or to the settlement of Fort Chipuyan (Province of Alberta), which open access to protected lands. Fort Smith, home of Wood Buffalo Park Authority, is accessible via the Mackenzie Highway, while Fort Chipuyan, home of the headquarters branch, is not easily accessible by road, only by air. When planning a tourist trip, you need to consider that there are practically no roads in Wood Buffalo. Only one car route has been created for excursions in the national park, while there are a huge number of rules for driving a car, the violation of which is punishable by impressive fines. As compensation, there are many walking routes for every taste. If desired, you can use short walking paths or choose difficult and long hiking trails that require a certain experience of such trips. The risk of a close encounter with predators (lynxes, wolves) is minimal – they are by nature cautious and avoid human society.

In Canada, tourists are allowed to travel on large rivers.

By renting a transport (canoe or ordinary boat) in Fort Smith, you can sail to Fort Chipuyan, Fort Fitzgerald or Fort McMurray and enjoy the beautiful scenery of Wood Buffalo from an unusual angle.

Those wishing to explore natural attractions for several days have the opportunity to stay in the cities adjacent to the national park – Fort Smith, Yellowknife, Hay River and Fort Simpson. Locals are happy to rent out a house or a room, hotel rooms and campsites are also available. The latter are at the disposal of the Wood Buffalo administration, which issues a parking permit. In conclusion, it should be noted that Wood Buffalo as a tourist site operates all year round and is beautiful in any season. Its visit will not leave indifferent everyone who is in love with nature, and will give amazing impressions for a lifetime.